The inhabitants of Crosswicks met at the home of Joshua English on January 5., 1822, to form a fire company and purchase a fire engine. Committees were appointed to collect money, purchase an engine, and draw up a Constitution. Robert Vanderbeek was named Chairman and Nathan Satterthwaite, as Secretary.

At a meeting on January 26, 1822, it was reported that subscriptions totaling one hundred eleven dollars ($111.00) had been obtained and Crosswicks Fire Co. had purchased the ancient hand-drawn, hand-pumper from a pump concern in Seneca Falls, New York. The cost of the engine was one hundred dollars ($100.00).

Of more use than the historic value in those days and in as good condition today as it ever was, it turned out to be equipment dated 1744, First used by the Union Fire Co. No.1, of Philadelphia, organized in 1736, formed through the efforts of Benjamin Franklin. Several of the original buckets, made of leather and inscribed “Union Fire Co. No. I, Phila. 1744”, are part .of the equipment Crosswicks Folk have been taught to venerate, even though the purchase may have been part of an old-time trade-in.

It was the only fire protection the area had for a hundred years. The old apparatus is still in the possession of the company and is in good working order today.

The Constitution was submitted, amendments made and it was approved and signed by the membership in 1822.

January 27, 1827, a motion was passed that the President furnish the Captain of the Militia a list of the members of the Company. This was done to exempt the men from militia duty.

In 1841 it was agreed to sell the engine, hose, buckets, and ladders at a public sale, evidently because of a lack of members. This was later rescinded as more interest was shown.

Meetings were held annually for many years in some member’s homes and supper served before the meeting. Then the Company met in Franklin Hall or the Post Office. An engine house was built in 1858 and the first meeting was held there on September 4, 1858. According to the Constitution, fines were levied for not attending meetings, being late for the meeting, and neglect of duty. A committee member whose duty it was to purchase hose reported that he had neglected to do so and was fined fifty cents. The fine for being late at a meeting was six and a quarter cents, for being absent without good reason, twelve and a half cents. Sometimes there would be no fires reported for intervals of one or two years.

Edgar Brick was elected a member at a meeting held on May 7, 1864. In 1874, a motion was passed for the directors to meet every two months to put the engine in order and wash it. They were paid fifty cents each they met. If they did not show up, they were to be fined fifty cents.

A request was made on August 29, 1887, by the Fairmount Fire Company of Philadelphia for the loan of the old fire engine for their use in the Centennial Parade to be held September 15, 1887, was granted. Chief T. Gardner Bunting was ill and Ellis Southard was deputized to go in his place. The engine was taken to Philadelphia by boat from Bordentown.

The first firehouse and a motor chemical fire apparatus were donated to the fire company by Josiah E. Brick, Charles W. Brick, and Arthur R. Brick in memory of their father, Edgar Brick. .The building was dedicated on November 25, 1922. The fire engine was a Brockway Truck with two large chemical, soda, and acid tanks. This truck was replaced by a Reo truck, one and one-half ton chassis with panel bandy nine feet long, dual tires 32×6 on May 14, 1937, and that was replaced by the present 500 gal. Ward LaFrance truck in July 1952. The fire company also had a 750 gal. 1949 Ward LaFrance truck and a 1954 Van, for auxiliary equipment. All the fire fighting equipment is now housed in our present firehouse which was converted from the old Crosswicks School. In 1996, Crosswicks-Hamilton Fire District #1 purchased a KME 2500 gal/1500 GPM Pumper-Tender 2612. In 2009,  Crosswicks-Hamilton Fire District #1 purchased a 75-foot KME with 500 gal / 1500 GPM Quint 2614.

The station was renovated in 2015 as the upstairs, engine bay, gym, and hall were all redone and were deemed more functional for the firefighters. Renovations were completed in 2018.

The Fire Company operated out of the old Blacksmith shop until 1977 when the current firehouse was built. In 1993, additions were made to the building to accommodate the growing department.

A rescue truck was obtained in 1991, and in 2006 our current Pierce 1000-gallon pumper was purchased.  In addition to our engine and rescue truck, we also have two tank tenders, two utility vehicles, and a fire police car. In 2017, Chesterfield Township Fire District #2 purchased a Pierce Rescue. 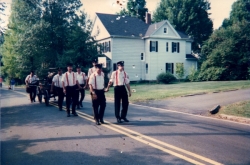 This site has been viewed 26,568 times.
Events
Pictures
Apparatus
Maintained by the members and staff of Chesterfield Hamilton Fire District #1. Designated trademarks and brands are the property of their respective owners. Copyright © 2006-2021. YourFirstDue Inc. All Rights Reserved. Content on this web site is supplied by Chesterfield Hamilton Fire District #1. YourFirstDue Inc. cannot be held responsible or liable for any content, text, pictures, or any other media found on this web site.
Management login
Powered by